The Victoria Village Hockey League runs a select hockey program that is governed by the North York Hockey League (NYHL, incorporated in 1953).

Select hockey was formed to give registered North York house league hockey players a slightly more competitive alternative, without having to commit to the rigors of GTHL or OHA hockey in terms of expense, intensity and excessive travel, while at the same time maintaining a commitment to their house league team.

It is an excellent level of hockey for those who wish to challenge themselves a little more.

There are some thirty two Associations like Victoria Village across Toronto in the NYHL, each icing from four to thirteen Select teams. This past year, Victoria Village sanctioned six teams.

At the beginning of every season, each Association announces tryouts for their Select Program in divisions that mirror house league age groups. These tryouts can only take place after September 1st and it is incumbent upon all those involved to follow the fundamental rule that house league hockey takes precedence over Select hockey. This is adhered to very strictly by the NYHL to make sure that all house league programs remain strong within the Associations under their governance.

For those who want to form teams they are guided through the process by the Select Convenor of their league with the rules & regulations. If there are enough players & coaches available, then a team is formed & the Convenor registers them with the NYHL to begin play.

There are now two seasons in the NYHL, the first is the Fall season which begins play October 1st and the second is called the Winter season and begins play in early January.

In order for a team to begin play in the NYHL Select program for the Fall session the team must have tryouts and register their team by the October first deadline. If the team does not get registered on or before October 1st they must wait until the Winter season and register on or before December 1st.

Each Select season consists of a game and a practice each week with a tiering process carried out by the NYHL administration offices, depending on how many teams are registered in each age group. The advantage is that the NYHL moves teams in to comparable levels of competition in order to eliminate clubs from having to play in a division that may be too competitive. At the beginning of each season, teams play in divisions depending on their previous year’s success. The tiering process usually takes place over the Christmas period so that new realigned divisions are assembled for competition up until the playoffs begin in March. The Championships are played in April culminating with an all-star game in every division at Downsview Arena.

This program gives rise to a child being able to be on the ice with an additional game & practice per week from October to the end of March (if they make the finals). It is a very formable way for a child to get the most out of hockey for a reasonable cost, not to mention the travel. 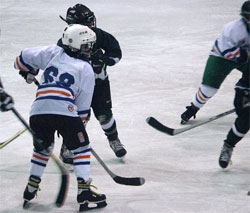